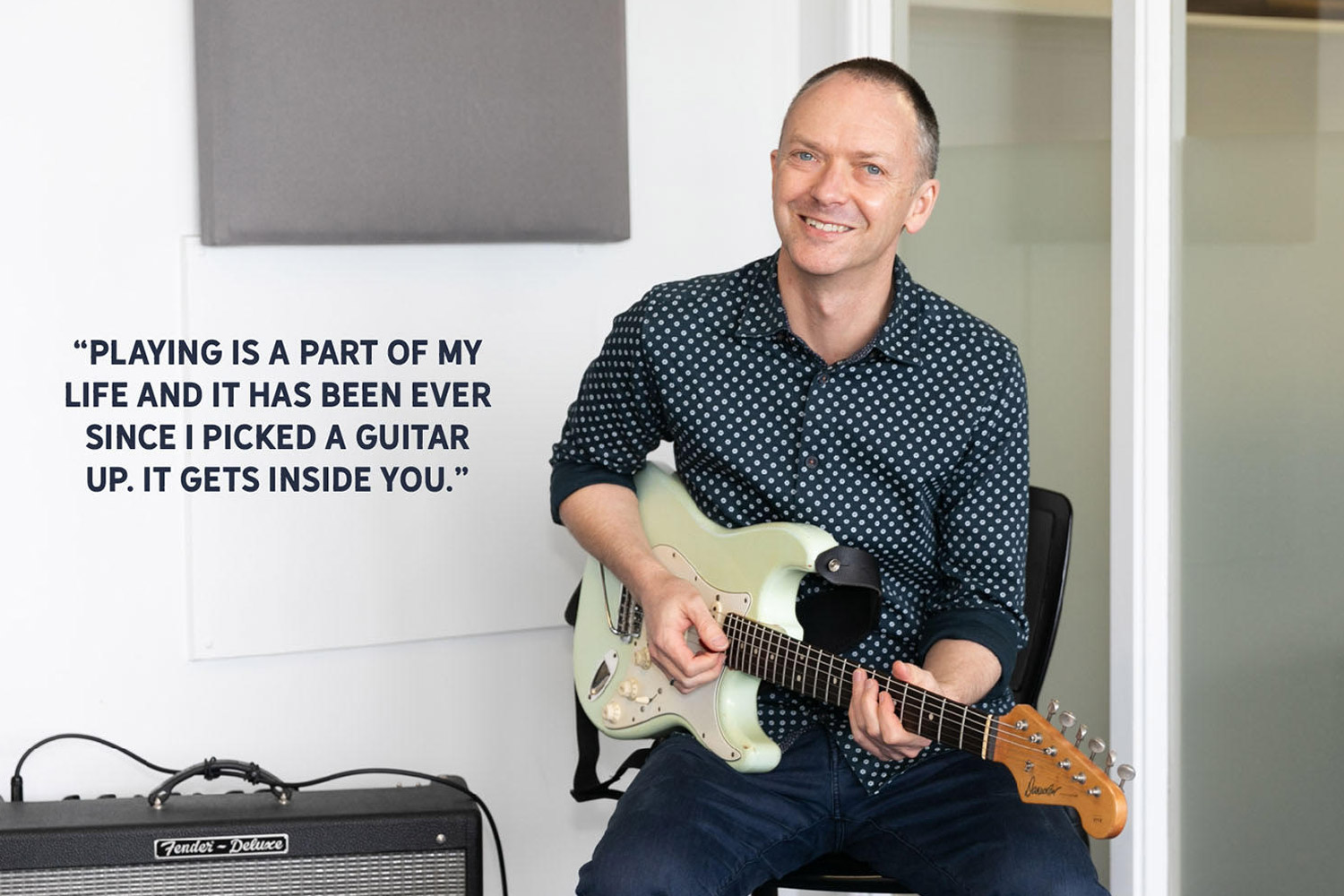 “Guitar has been an integral part of my life for a long time; I feel completely weird if I don’t play every day – and my wife will attest to this – I am not the same person. Playing gets inside you and you never stop learning.

It wasn’t promising at the start though! I had lessons when I was six, but since I was not practising, my parents decided to stop the lessons. Then one day, when I was 15, I decided that I’d like to try guitar again, and I haven’t put it down since. I gigged lots growing up and at university and then I studied at the Guitar Institute which was London’s top electric guitar school. I taught there for over ten years afterwards.

By the time I had finished studying at the Guitar Institute, we were gigging four nights a week in London. We were very lucky that we got to play loads – those kinds of opportunities don’t exist anymore unfortunately. Then I went to Boston and studied at Berklee College of Music, which is a kind-of musical Mecca – it is an incredible place. Following a further spell in London, my wife was offered a job back in Auckland. She is from Pakuranga, so we arrived back in the area.

The hard thing about coming here was that I came with nothing and had to start again from scratch. I started teaching from home in the spare room, then when we had our daughter, I moved into the garage and that became a teaching studio. As student numbers grew, we had to move – we have been in our current premises on Picton Street for five years. My training at the Guitar Institute was performance-based, so my whole education was ‘learn this, get on stage, play now’. I’ve always wanted to make sure that our students can do that. Some people don’t want to perform and that’s fine, but we do try to provide as many performance opportunities as we can. We’re always refining and improving our teaching methods. With the school, it’s very much a collaborative process between all of the teachers; it’s something we do continuously and it’s resulted in some amazing things.

We certainly suffered financially during the lockdowns. Some of our students obviously had reduced income, so there was that side of it, but there was also no new business coming in. We did a lot of remote teaching and offered a bit more as the world got comfortable with online instruction. One of the silver linings was that I managed to get in touch with a number of world-class players and ask them if they were able to do online masterclasses for our students – we had some amazing sessions with incredible musicians that you would normally never, ever get to learn from here – that was really cool!

We have come across a fair amount of people who re-evaluated their lives while they were stuck at home in lockdown and decided, ‘Hmm, it’s time to do that thing I’ve been putting off forever… maybe I’ll start playing guitar.’ or, ‘I’m just so bored being stuck at home and I need to find something to do.’ So, I think we’ve come out the end pretty much where we were at the start. We worked hard to make the technology work for us and the students were very positive and supportive about it.

I lived in London for a very long time, but I never liked the impersonality of it, you never knew who your neighbours were. Howick is totally different; it has a great community feel. As a School, we get involved in events such as the Christmas Fair, playing at Poppies Bookshop and supporting the Uxbridge Centre – there are always things going on.

I feel more at home here than I would do if I lived in the CBD. I like being in a smaller place and knowing people and even bumping into the students when you are going shopping or going out to dinner gives it such a unique feel – I can’t see us ever moving from here, it’s perfect!”