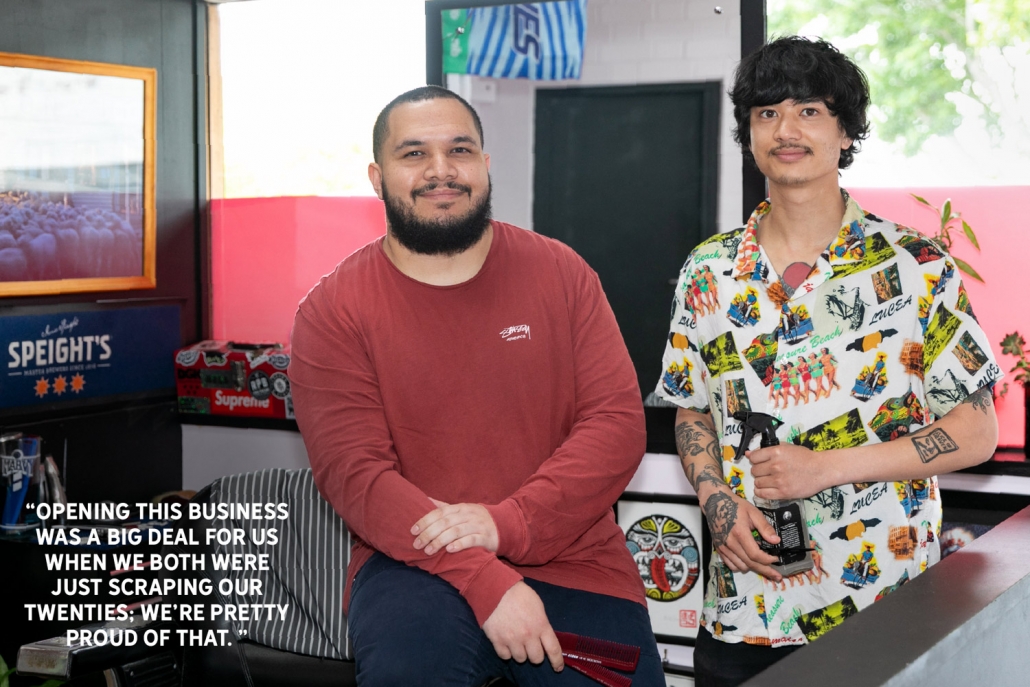 “We both worked up at Whiskers for some years before Terry (the owner there) bought this shop and installed Emanuel as the manager. Four years later he offered the business to us and we bought it off him. Now we’re a team of four.

Although I’m originally from Papakura, I’ve been working out East now for so long now, I associate more with people out East than those in my own neighbourhood; I’m just here more days of the week! It’s a good community feel and everyone knows everyone. It’s pretty chilled out.

Yannis got kind of catfished into the job! “When I finished school, I didn’t know what to do – Dad showed me a pamphlet about barbering and I ended up doing some in my gap year – now eleven years later I’m still doing it and really enjoying it.”

We love our job – it’s pretty chill. If you have good work mates, it’s like hanging out with friends and getting paid, so you just turn up, wear what you want to wear, say what you want to say, play whatever music you want, and then get paid. It’s pretty much like the ultimate life goal for a job.

We share a few customers with Whiskers – it’s pretty cool that our competitor is also our mentor, and we still hit Terry up for advice. We couldn’t have done it without him; he taught us heaps of stuff.

Fundamentally, the easiest way to differentiate between barbers and hairdressers is barbers cut squares, and hairdressers cut circles. A hairdresser can do dying, and perming, and straightening and all that stuff, while we just cut. It’s sort of like rugby and rugby league, if you don’t know either of them, they look exactly the same while if you know one of them, you know that it’s quite different to the other.

Opening this business was a big deal for us when we both were just scraping our twenties; we’re pretty proud of that. You’ve got to put yourself out there and try new experiences and new things. Then you can put as much energy as you want into something you really want. There’s power in that.

We installed our new online booking system last year so people can just jump on and organise an appointment. We’ve had fantastic feedback about it, as people can just come in and then get back to work without having to wait around. You can get in and book via our Facebook page – FridaysBarbershop – just click on the ‘Book Now’ button at the top of the page.