A Historical Walk of Howick Village

The Maori call Howick “Owairoa”. They have lived here for over 800 years. Howick was named after the third Earl Grey, formerly Viscount Howick, Minister for State & Colonies in the British Government who was responsible for sending soldier-settlers, called Fencibles, to Howick in 1847. His father, the second Earl Grey, gave a tea recipe to Richard Twinning whose company still sells Earl Grey tea today.

This walk takes approximately 2.5 hours at a leisurely pace. Toilets are located in Picton Street by the Information Service, Moore Street/Central Terrace, at Howick Beach and Howick Domain.

1. This walk starts at the oldest building in South Auckland, All Saints (Anglican) Church. Built in 1847 under Bishop Selwyn, it was designed by Frederick Thatcher ready for the arrival of the first Europeans, Fencibles (soldier-settlers) in November 1847.

Originally in the form of a cross, it was prefabricated at St Johns College Yard in Kohimarama and transported to Howick on the college vessels “Undine” and “Marian” where a large body of college associates, using carts from local farmers hauled the large timbers to the knoll overlooking Howick Bay, Waipaparoa.

Near the church porch and the lych gate, three children of Howick’s first resident vicar, Vicar Rev. Vicesimus Lush, and Blanche, his wife, are buried. They died within 9 days during a scarlet fever epidemic in 1854. Fifty Howick children died in that epidemic.

2. Walk down Selwyn Road and opposite the new church is a path to the rock wall supporting Howick’s first bowling club, built by Howick entrepreneur Hugh K. Gilmour in 1907 on a path to Uxbridge Road.

3. Nearby on a plaque commemorates the site of Howick Manse where the Presbyterian Minister lived from 1921 to 1990 near the Uxbridge Presbyterian Church, now Uxbridge Arts Centre.

4. At The Glebe corner, Hughes Bakery operated from 1880 to 1921. The bread oven is still preserved in the present owners’ garden which used taiaire timber from the Mangemangeroa but some locals would not buy their bread as it was downhill from the cemetery.

5. Gulf Views Rest Home opposite was formerly the old Howick Obstetric Hospital from 1940 to 1991.

6. Howick’s first Hospital operated below it by Nurse Froode, with doctors visiting from Otahuhu, Papatoetoe or Remuera to the farming community of Howick.

7. 58 Selwyn Road identifies a “modernised” house built in 1898 from demolition of the “Prince of Wales Hotel” that was formerly at the corner of Gibraltar and Moore Streets. A brace in the ceiling still has “Prince of Wales” painted on it.

8. The first Howick jail was opposite, built of wood, close to the “Royal Hotel”. There are several accounts of prisoners escaping, getting into mischief and returning to jail!

9. Builder Dan Strong’s cottage at 64 Selwyn Road has been altered. He helped build the Howick Stockade in 1863.

10. Shamrock Cottage is the second oldest building in South Auckland. It operated as a wet canteen (liquor store) in 1847 soon after the Fencibles arrived. Former Fencible Benjamin Lewis opened the “Royal Hotel” here in 1848, as we see it today. They advertised it as having 11 rooms downstairs and 3 upstairs, as well as stabling for horses and good wines. The well is 33 feet deep.

12. Websters’ Store (now chiropractors’ rooms) was built for the Coronation of King George and Queen Mary in 1937. Note the “W” in the lead light windows. It was built as a general store and sold refreshments to beach visitors.

14. 112 Selwyn Road was built in 1900 for Captain J.A. Wyatt, accommodation for “summer visitors” who came to spend holidays in Howick, landing off ferries from Auckland at the Howick Wharf. It was known as Bungalow Boarding House.

15. Maori have lived in Howick for over 800 years. They called it Owairoa (long waters). There was a Pa (fortified village) in Marine Parade above Howick Reef but was destroyed by Ngapuhi from Kaipara in about 1628.

16. The Fencibles, their wives and families arrived here in November 1847 and were accommodated in two 100 foot long weatherboard sheds called by James White “an apology for a pigsty”. Many preferred to move into their acre allotments, into raupo cottages built by the friendly Ngai Tai Maori. The sheds were by the sea at the end of Uxbridge Road.

17. The World War II Gun Emplacement was built in 1942 and many beaches of Auckland were protected with rolls of barbed wire when the Japanese threatened attack.

18. The 800 foot long Wharf was built in 1896 when Prime Minister Richard Seddon wanted his party member Major Harris to be returned MP for this area. The wharf was an “election carrot”. It replaced a short wharf built in 1854 by the 58th Regiment for use at high tide. Motor transport in 1920’s saw the cessation of the Auckland ferry service. Note the cut off piles at low tide.

19. Selwyn Road was the “pioneer path“. After settlers arrived at Howick Beach they walked up the clay ridge to All Saints Church and the village in the valley beyond 1847.

20. Walk back up Selwyn Road and up Sale Street, past Masefield Street where many cottages started as miners’ cottages at the Thames or Coromandel goldfields and were shipped to Howick when the gold ran out.

21. At 1 Tanglewood Place, note the “Keppoch Lodge” plaque. Built in 1850 for Captain Alexander MacDonald, officer of the “Sir Robert Sale”, it is an excellent example of a Fencible officers home. He married his cousin Mary whose family were descendants of the 17th Chief of Keppoch killed at Culloden in 1746. They married at Gretna Green, and later at a family church wedding.

23. 34 Abercrombie Street cottage was built for Private Henry Rowe and Private William Cherry who both came on the “Sir George Seymour” in 1847. It is the last remaining recognisable Fencible’s cottage in Howick although there have been recent additions. Today there are no Fencible cottages in Panmure or Otahuhu, and only two left in Onehunga, other than the five in Howick Historical Village and two at MOTAT.

24. Walk down Abercrombie Street, cross Moore Street to the old parade ground/village green now called Howick Domain. Being swampy, the Fencibles generally paraded on the ridge of the present Prospect of Howick, then marched to either the Catholic or Anglican churches. Church parade was compulsory and failing to attend twice was a “mutinous act” which incurred forfeiture of their uniform, cottage, acre of land, pension and repayment of their passage from Britain for them and their families. It caused considerable discontent.

25. Walk up Howe Street after crossing Wellington Street (named after the Duke of Wellington, Commander in Chief of the Army and Waterloo hero). At 60 Howe Street note George and Mary Wagstaff’s Cottage. Howe Street used to be Howick’s main street with Wagstaff’s store and blacksmith’s shop, Howick Arms Hotel and other important buildings around the village green. After 1900, Picton Street became the main street.

27. 40 Ridge Road, you may pass Captain J.C. Irvine’s homestead “Prospect Hill“, named after his family home in Northern Ireland. He served in India and in the British Army and like many of his contemporaries, retired to New Zealand. He served as a magistrate in the Howick Courthouse.

28. Carefully cross Ridge Road to the Coronation (QEII) Grove of oaks up to Stockade Hill. Women and children slept here in 1863 during perceived threat of attack. The Stockade was constructed of loopholed sheets of iron, surmounting a ditch and bank, enclosing the barracks. On Christmas Eve 1863, Bavarian mercenary soldiers from Puhoi sang Christmas carols around a tree covered with lights and decorations, and presents were given to local children. The Stockade was not required. The War Memorial commemorates those who died in World War I and World War II. Note views of the islands of the Hauraki Gulf, Tamaki River, volcanic cones, Otahuhu Portage and Manukau Heads.

30. The Our Lady Star of the Sea Church was built in 1854. It was replaced in 1960 by the present church. Of 773 Fencibles in Howick, 368 were Catholics who left Ireland during the potato famine. Many are buried in the church yard including 21 children from 1854 Scarlet Fever epidemic.

32. Continue down to Howick Post Office with the plaque near the doorway. Opposite, and behind…

34. The old Howick Town Hall was on the site of Victoria’s Gift Shop and opposite…

35. The Prospect of Howick, built in 1930 by James Fletcher in brick, replacing the large wooden Marine Hotel built in 1906 and destroyed by fire in 1925.

37. Over the road at 137 Picton Street was Jack Howie’s Howick Harness and Shoe Repair shop and BNZ agency.

39. The Monterey Theatre built in 1929 in the Spanish Mission architectural style. It was rebuilt in 1999 as shops and town houses.

40. Opposite William Green’s Memorial Gate commemorates the popular headmaster at Pakuranga School and vestryman to All Saints.

Above: The historic All Saints Anglican Church – see point 1 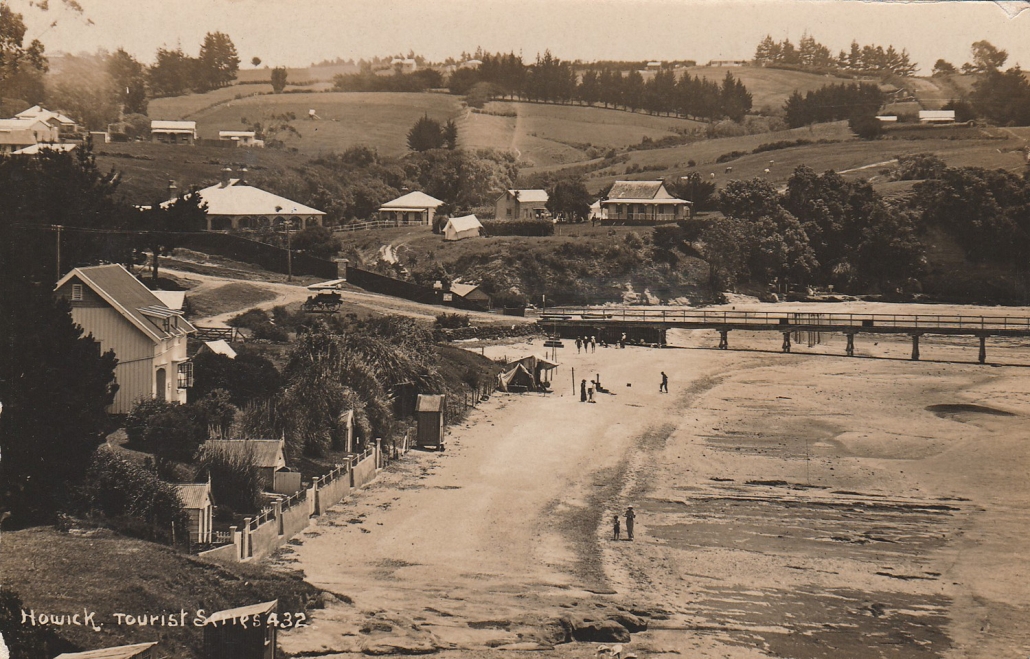 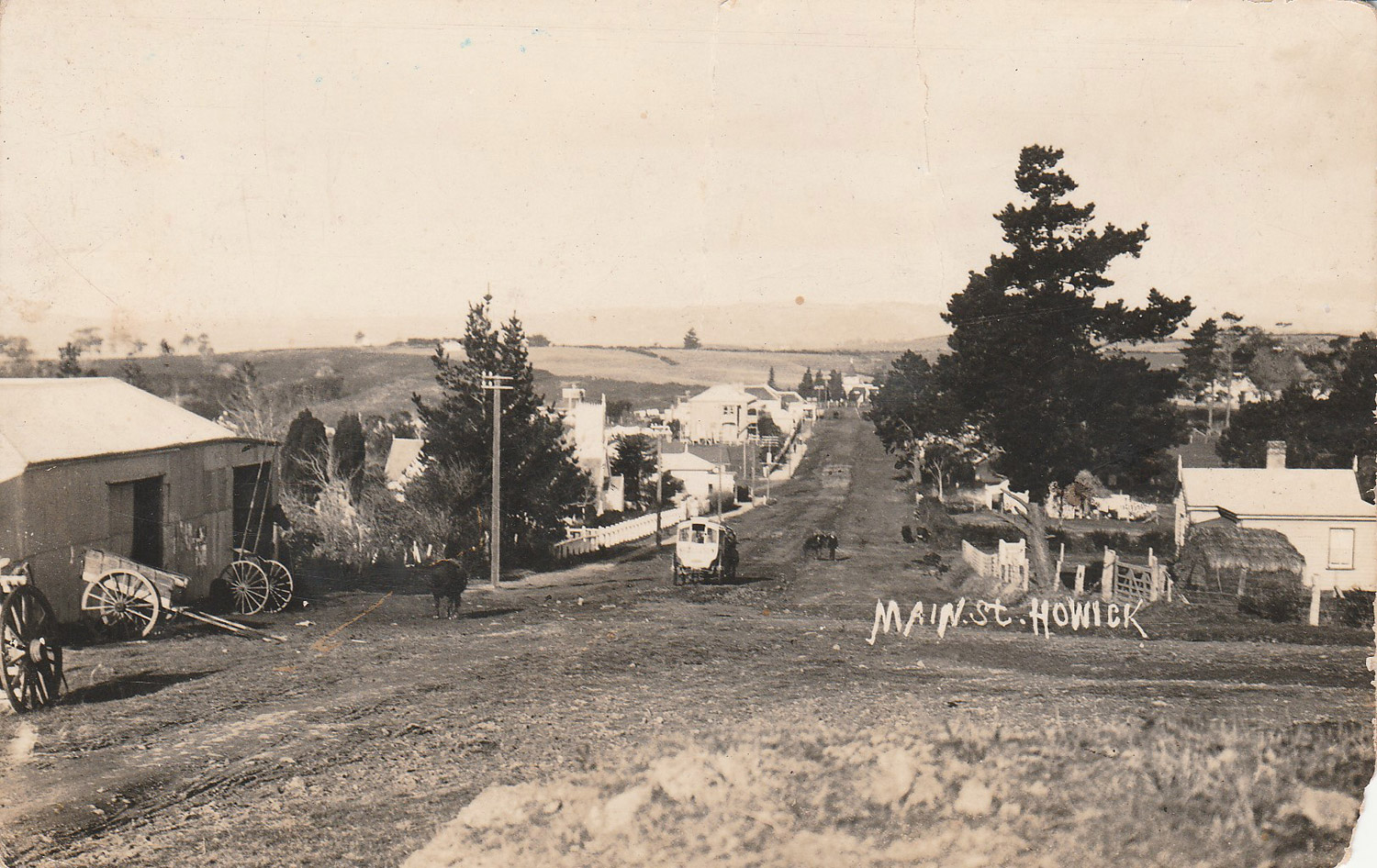 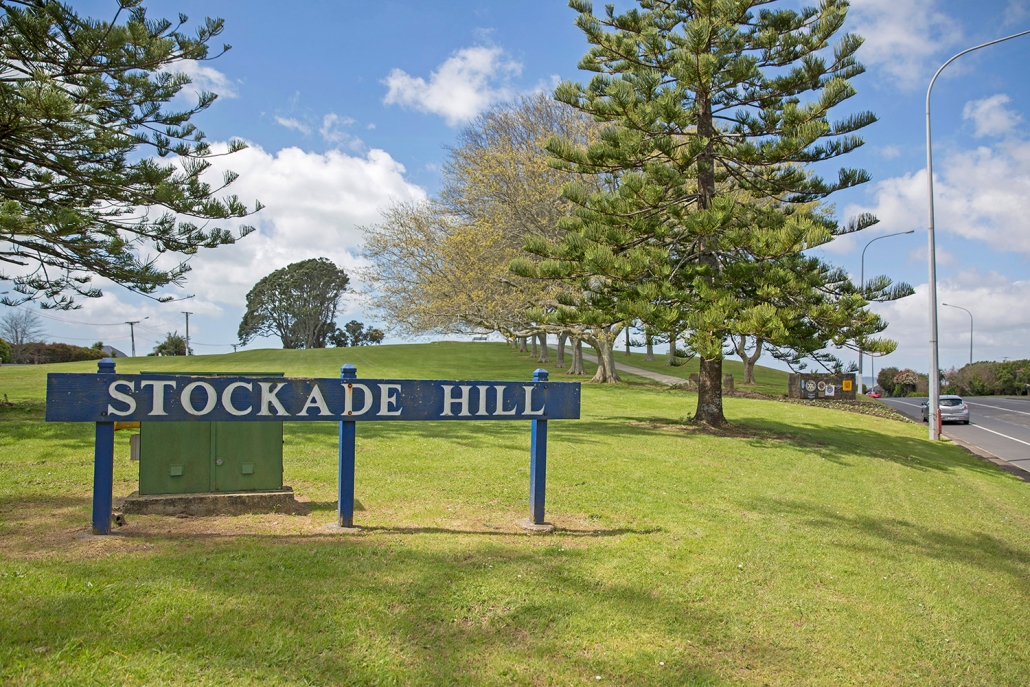 Above: The Prosepct of Howick – see point 35

This completes the historical walk of Howick Village. To view Howick’s historical heritage, visit the Howick Historical Village. This living museum with costumed guides and original buildings presents life in a fencible settlement in the 1850’s period.