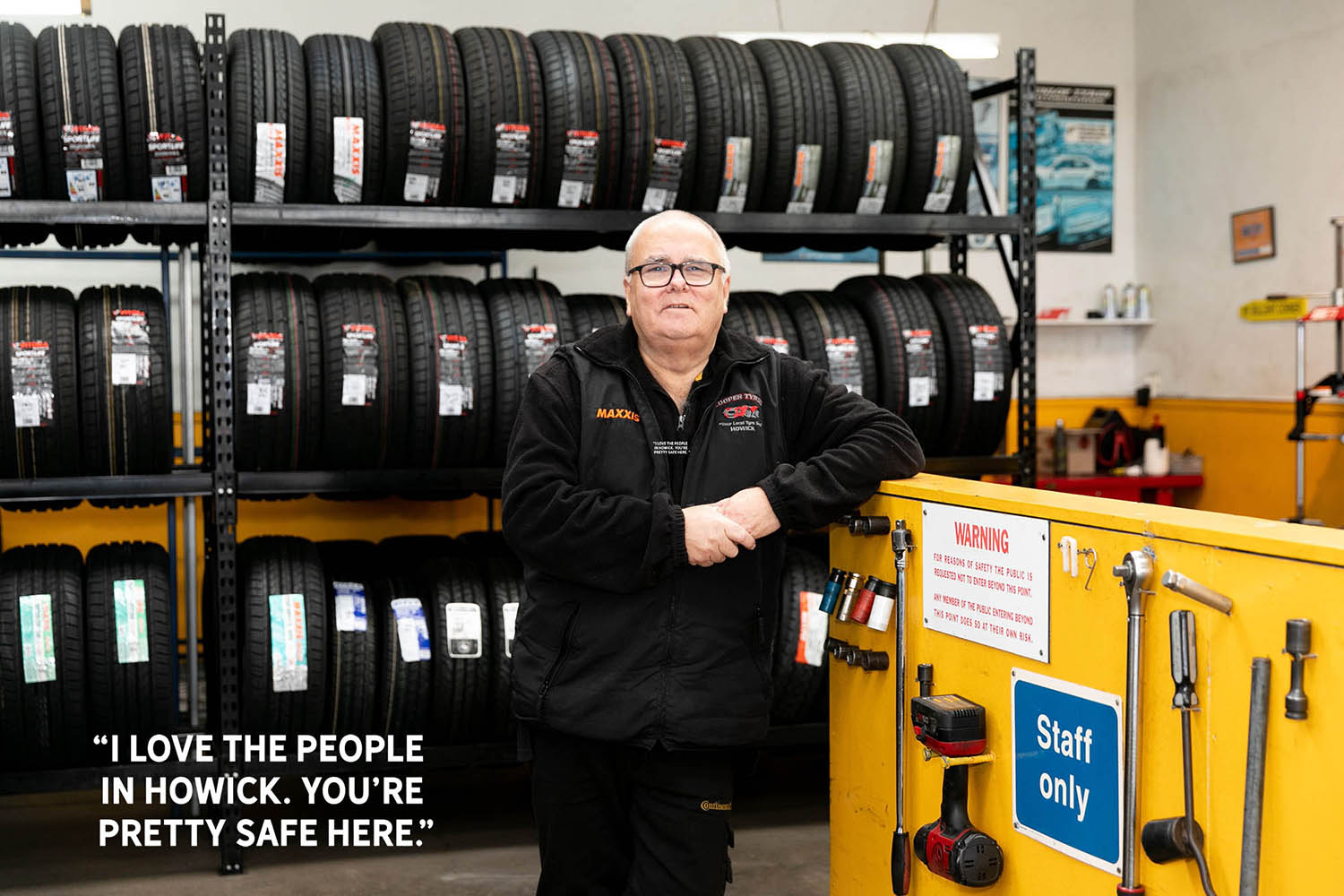 “I was a little rascal when I was a kid – I didn’t expect to live to 20. There are a lot of old families in Howick; they love seeing that I’ve grown up and taken control of my life. I’ve got a good wife – that’s what’s done it! The business has gone from strength to strength. I was born 100m down the road. I’ve lived my whole life here.

I started out at Spooner Motors down at Eastern Beach as an apprentice motor mechanic. Spooner sold and he wanted me to go to the North Shore, but I’d already bought a house with my wife down at Bucklands Beach and I wasn’t going to go there. The new owner and I didn’t see eye to eye and he wouldn’t give me the overtime that I needed. I was a poor apprentice and I needed to earn money! So I did extra shifts at petrol stations pumping gas and Carol used to work in the Telecom exchange doing double shifts. That’s how we bought a house early.

I had more fun on the tyre side of the business than the mechanic side, so I went for an interview with Dunlop. They heard I’d bought a house when I was 18 and offered me job as manager. We moved into this building on my wedding day, 28th November 1981, and I bought it five years later.

I met Rob Cooper down in Queenstown when we were testing snow tyres for Continental. I was very impressed with him. He was young enough to be my son. There was a Cooper Tyres in Howick and it was common knowledge that it was struggling. It went bankrupt and we took the name.

I don’t mind helping genuine things in Howick because I’m a Howick boy. We sponsor Bellyful quite heavily. Bellyful make meals for mums who aren’t coping – we have a main freezer here. My wife is involved. We sponsor rugby as well and pay for a sign at the Pakuranga United Rugby CIub. At the Howick Hornets we sponsor a club player and we pay for the signs there.

I’ve built my reputation after 35 years here. If you want cheap and nasty there’s no point coming to me. You’ll always find someone who doesn’t like me, but if people treat me right, I’ll treat people right and I’ll give them a hand. I get a lot of cakes, biscuits and chocolates from a lot of old people. Girls come in here looking for me saying “grandad so and so has told me to come to you and get your advice.” I’m very proud of that.

I treat people how I’d want to be treated. Sometimes solo mums and people who are having hard time come in – we’ll find a tyre and put it on for them. If they say they can’t afford it then I’ll say “Did I ask you for money?” and I’ll ask them if they’ll bake something instead. I’m not going to take the last $50 out of their pocket when they’re trying to feed their kids. I’m no hero or anything, but I don’t mind helping people who need help. There are too many people who take, take, take. If I charged everyone for every single thing I did I’d have a hell of a lot more money, but would I be happy? No.

I love the people in Howick. You’re pretty safe here. My kids are in the North Shore now, but I like Howick. As soon as I drive out of Howick I think: “No, no – I want to go back to Howick!”