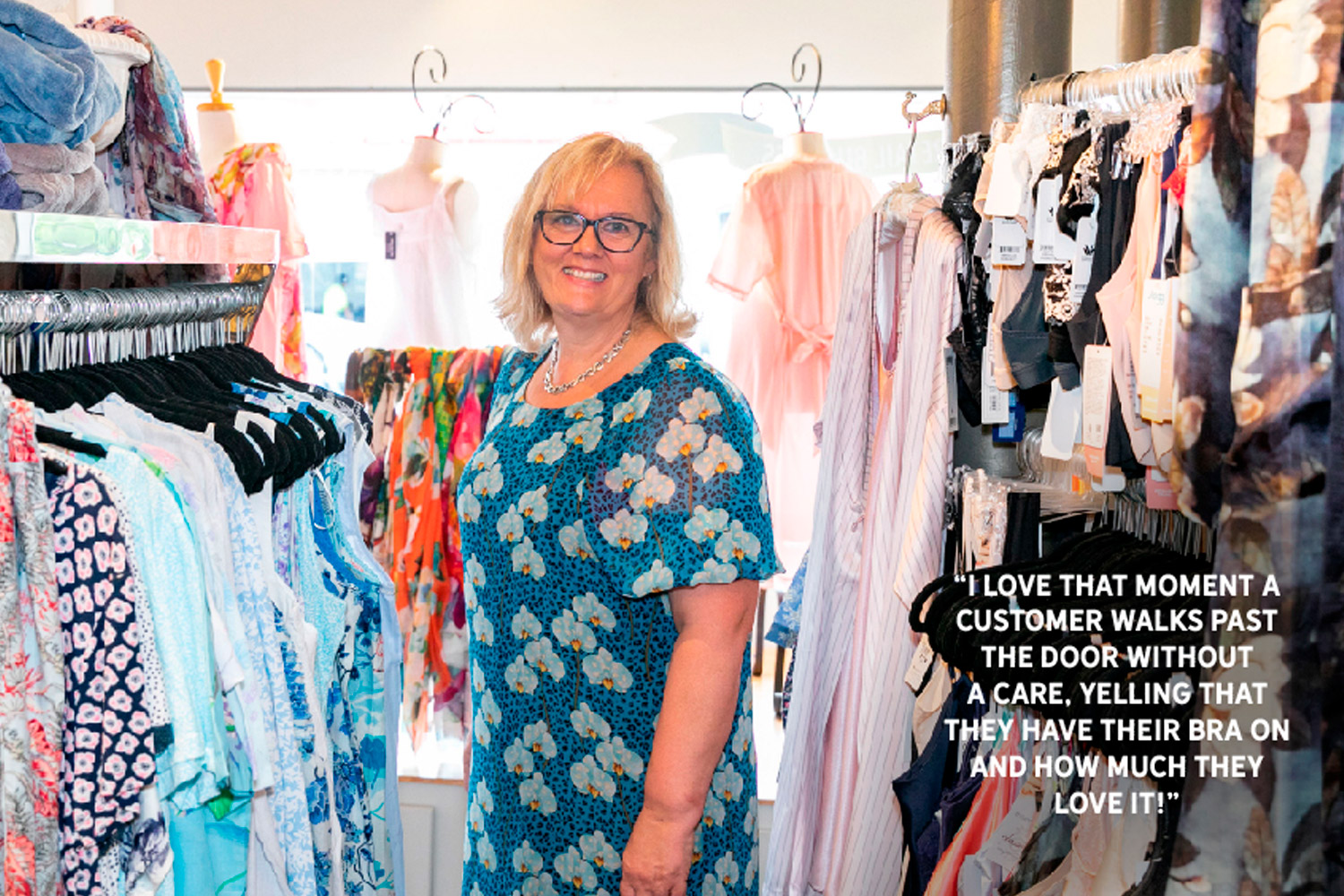 “I bought Lily Whyte Lingerie just over three years ago from Judy who had owned it for more than thirty years. At the time, it was one of those life events. I had been working in healthcare for more than three decades after starting as an occupational therapist, and I was done. I needed to do something different.

You’ve got to grab life by the horns, you can’t wait for somebody else to do it for you; so I gave up my job and started looking for something new. My husband said: ‘Why don’t you just go buy a business?’, I thought: ‘I don’t know what to do!’. We looked at other things, but Lily Whyte Lingerie was the one I just kept coming back to, and I thought, ‘I can do that.’ The stars aligned and here I am.

The village is lovely and has a real community. Anyone who has a business here will thrive on that. Everybody’s regulars are everybody’s regulars, but we also have a huge amount of people who come from all over Auckland and other parts of the country to see us specifically too, because there are no lingerie shops left. We’re well known for good bra fitting, and also our variety of nighties – people know they’re going to get something a bit different.

You do get men who come into the shop pleading, “Please help me! I want to buy something nice for my wife”. The other day I had three men in the shop and I was wondering what was going on! Sometimes they know what she wants, and sometimes they have stolen a bra and hope that it is her favourite. I’ll look at the bra and go ‘Hmm, let’s just see what we have got that has a similar look to it’. It can be quite hilarious.

We sell anything from your basic, everyday bras to luxury ones – for that special gift. People still buy things for their wedding night, which is a little bit different, so we try and provide that. What the bride wants, and the mother of the bride wants could be two separate things though, and if they’re shopping together, it’s even more interesting! We try to have a good variety, especially since now people aren’t able to go overseas and get what they usually would do. We’re getting a lot more of ‘I don’t usually shop here, but what have you got?’

I love that moment where it’s been a couple of days since someone has been inside and they walk past the door, without a care, yelling that they have their bra on and how much they love it. I get a buzz when someone is really happy with the fitting and the work we’ve done. It helped too that our customers were really supportive during the lockdown. We were closed during Level 4 but as soon as Level 3 was announced, we had our online shop and we opened back up. More than 50% of the sales were local people, and that was great, as it was local people who genuinely wanted to support us. It feels fantastic when you get lots of support from customers, and the other retailers as well. It is not a competition between us, and I do recommend other local shops to customers if they ask. There is a great vibe around the place, and people really do care.

I keep coming back to it, but Howick is something special. Even though it is within the city boundaries, it still has that community, much more than anywhere else. People shop here who want the village to survive, and it has done – thanks to some great local support.”