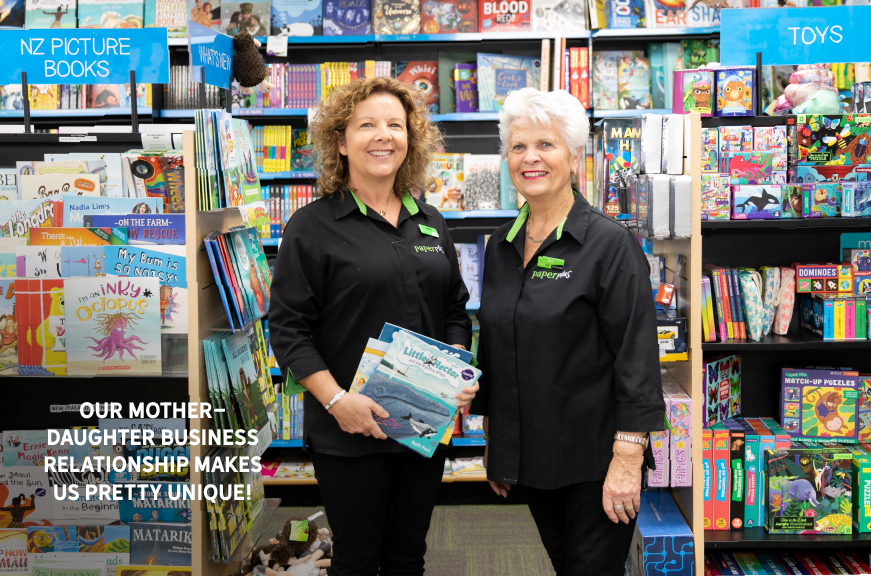 Paper Plus has been my family’s business for the past 46 years… I have been running it for the past 27.  My mum Bev is still here!

I’ve been around the business from the start; as a child I was always running in and out. I worked here as a student whilst doing my commerce degree, and learnt a lot about dealing with the public and the dynamics of the business during that time. I then headed off for a few years to do accounting and ending up in Australia for a year, but I came back because my grandmother got really sick. My mum was finding it hard running the business and looking after her, so I’ve been working back here since 1994.

In the very early days late nights were huge, we were the place to be in Howick and there was no weekend trading.  Then came Saturday mornings and eventually 7 days a week, and also with Lotto extended hours.  We open most statutories, and until 2020 the store had basically never been closed.  COVID lockdowns are ‘surreal’.  Going around the shop and turning off power that has never been switched off, being instore without the doors being open.  The resurgence of our customers, the queues we’re experienced and the whole ‘local’ push has been amazing. The feeling of support we get is so humbling.  I’m looking forward to seeing staff, customers and local businesses again as we emerge and brace for what will inevitably be a big few weeks. Safe trading at different Alert levels and also keep up with stock everyone will require, can be challenging with supply chain issues.

This store has a lot of history! It was started by Rick Crandall and Jim Peters -– Crandall Peters Book Shop was well-known in Howick and around town. They had a Spanish white, swishy façade out the front, with wrought iron balustrades and alabaster picture theatre carpet inside. In those days, the stock was a third music, a third books and a third stationery; it also had a big magazine range. Rick and Jim sold it to us, and when Paper Plus started, we became foundation members. We have been Lotto members since day one (one of the original Lotto members in New Zealand), and have had the NZ Post shop for the past two years.

I was very involved in Paper Plus Group until a couple of years ago. When I got onto the Paper Plus Board in 2001, I was the only female, and fairly young at the time. I spent about four or five years as Deputy Chair, and then four as their chair, retiring after nearly 20 years in 2019. I’m doing my second stint now on the Howick Village Association (HVA) as their treasurer, and am also pleased to be part of the 175th Howick Celebration committee.

I wouldn’t want to be in retail anywhere else other than Howick Village. I put a post online during lock down saying how lucky we are. A lot of the Paper Plus stores around the country are in malls. They really struggled because they just couldn’t do click and collects and open up, whereas we could just trade from our door. We’re lucky being street-facing and to have the community we have; we really felt that as COVID hit and have realised how important it is.

I’m proud that we’ve been here for so long. We’ve seen a lot of businesses come and go, and we’re still here and thriving. Mum has been here for decades and decades, and is known throughout Howick – you’ll often see her working behind the counters still. A mother-daughter relationship running a business together for so long makes us pretty unique! I can’t think of many relationships like that.